Pasodoble (Spanish: double step) is a fast-paced Spanish military march used by infantry troops. Its speed allowed troops to give 120 steps per minute (double the average of a regular unit, hence its name). This march gave rise to a traditional Spanish dance, a musical genre including both voice and instruments, and a genre of instrumental music often played during bullfight. Both the dance and the non martial compositions are also called pasodoble.

All pasodobles have binary rhythm. Its musical structure consists of an introduction based on the dominant chord of the piece, followed by a first fragment based on the main tone and a second part, called "the trío", based on the sub-dominant note, based yet again on the dominant chord. Each change is preceded by a brieph. The last segment of the pasodoble is usually "the trío" strongly played.[1] The different types of pasodoble- popular, taurino, militar- can vary in rhythm, with the taurine pasodobles being the slowest and the popular being faster and often incorporating voice. Pasodoble as we know it started in Spain but is now played in a wide variety of Hispanic nations. Each region has developed their own subgenre and personal style of pasodoble, adjusting some formal aspects of the structure to fit their local musical tradition.[2] In modern Spain the most prolific composition of pasodobles is happening in the Levantine coast, associated to the festivals of Moors and Christians.

The dance is very free regarding figures. The dancers must remain one in front of the other, and keep their bodies parallel to each other at all times, lining slightly to the left. They must give one step per tempo. The left hand of the male and the right hand of the woman must remain united almost permanently. Besides this almost all motions and figures are accepted, which allows space for dramatization. The dance can be similar to the one-step, except for the speed and number of steps given.

The origin of this passionate form of music is disputed.

The facts known about it due to physical historical evidence are that it was being written as early as the 1780, since Spain has partitures preserved dating back to the 1780, that the 18th century, it was incorporated into comedies and adopted as a regulatory step for the Spanish infantry, and that the music was introduced to bullfights in the 19th century.

One hypothesis suggests, based on the etymology of the name, that it comes from the French "pas-redouble", a form of speedy march of the French infantry during the late 18th century. The pasodoble came from a French military march with the name "Paso Redoble". It has both Spanish and French characteristics. The steps often contain French terms, but the dance resembles the nature of the bullfight. It is believed to have emerged from southern French culture during the 1930s. Supporters of this hypothesis, mostly French musicologists, suggested that pasodoble was a way for the French to portray the techniques used in Spanish bullfights. This hypothesis neglects to explain the presence of partitures dating from 1780, that Spanish infantry already marched at doble speed before the French army did-albeit they did call this speed "forced march", not "doble step"- and the fact that the oldest forms of pasodoble have confrontation elements, like most Spanish dances, but don't have bullfight-related movements or themes.

A hypothesis based on the dance's free figures and rhythm states that it's binary rhythm and moderated movement points to an origin in traditional Spanish music and dances of the early 16th century. This dances, developed around 1538, were a gradual combination of Castillian music and dance (seguidillas) with the "garrotín", a fast and repetitive Romani couples dance.

Famous musicologists José Subirá considers that the origin of the tune was a combination of military marches and light music from Spanish popular theater that gradually permeated the "entremeses" of more respectable plays.[3]

Famous bullfighters have been honored with pasodoble tunes named for them. Other tunes have been inspired by patriotic motifs or local characters. The pasodoble is well-known and used today for dance competitions.

During the early 20th century, the pasodoble became part of the repertoire of Italian American musicians in San Francisco playing in the ballo liscio style.[4] Four pasodobles were collected by Sidney Robertson Cowell for the WPA California Folk Music Project in 1939 by Mexican American wedding party band on mandolin, guitar, and violin.[5]

Also called "military pasodoble", it was created as, or keeps its role as, an infantry march. It is usually fast and lacks lyrics.[6] Famous examples are "Soldadito español", "El Abanico", "Los nardos", "Las Corsarias" or " Los Voluntarios"

Often played during bullfights, or with that intense atmosphere in mind. They are slowed and more dramatic than martial pasodobles, and lack lyrics too. This pasodoble is based on music played at bullfights during the bullfighters' entrance (paseo), or during the passes (faena) just before the kill. It is also composed to honor outstanding bullfighters.[7] Some of the most famous are Suspiros de España, España cañí, Agüero, La Gracia de Dios,1 El Gato Montés, Viva el pasodoble, Tercio de Quites, Pan y toros, Cielo Andaluz, La Morena de mi Copla, Francisco Alegre, Amparito Roca, El Beso, Plaza de las Ventas.

Made to dance in popular celebrations and social reunions. They tend to be upbeat, but can also be emotional and introspective, with the occasional melancholic or patriotic theme. They usually require a small number of instruments and musicians and have lyrics.[8] Some famous examples are "Islas Canarias", "En er Mundo", "Costa Dorada" or "Valencia".

Pasodobles that require an entire band to be played, and are almost exclusively designed for popular dances and village celebrations. They often use colorful characters of the region and light hearted subjects as inspiration. This pasodobles are very alive in Spain. Even though not much is being composed, the traditional ones can be heard in Spanish popular celebrations, patron sain verbenas, and wedding. They can be danced in very large groups instead of as couples.[9] Well known examples are "Paquito el Chocolatero", "Fiesta en Benidorm", " Alegría Agostense" or "Pirata Quiero Ser".

A pasodoble performed mostly for spectacle purposes, sometimes in a bullfighting ring. This pasodoble may or may not have lyrics, but it often adapts other style of pasodoble and just changes the dancing to make it more spectacular for the public-often tourists. Essentially, this pasodoble dance involves role-playing. This two-person dance form has the man performing as the bullfighter and the woman as the cape.[10] It is known as one of the fastest Latin ballroom dances because dancers make around 120 to 130 beats/steps per minute. In some versions, the man portrays the matador in the dance, and the woman portrays the bull. flamenco-like qualities infuse the dance as the man and woman challenge each other.

Amparito Roca being played by a wind band

The leader of this dance plays the part of the matador. The follower generally plays the part of the matador's cape, but can also represent the shadow of the matador, as well as the flamenco dancer in some figures. The follower never represents the bull, although this is a common misconception. This form of pasodoble is a lively style of dance to the duple meter march-like music, and is often performed in the context of theater. This form of pasodoble was mistakenly taken as the original form by English and French musicologists visiting Spain in the 20th century.

Tunas is the name given to a brotherhood of students that play popular music together on the street to get some extra coins, or under the window of the beloved of one of them, to try and help the lovestruck member to get a date with her. Tunas have become one of the main forces keeping Spanish pasodoble alive. Tunas tend to adapt or repeat simple pieces that are already composed, but they sometimes compose their own, satyrical pieces.[11]

In addition to the Spanish pasodoble, already discussed, this rhythm has been adopted and modified by other nations:

Mexico has produced master composers of pasodoble, especially taurine pasodobles. Agustín Lara or Silverio Pérez. Some of the best known Mexican pasodobles are

Pasodoble isn't as popular in Colombia as in other countries, but the Colombia pasodoble, "Feria de Manizales", is an emblematic piece. It was composed in 1957, with lyrics by Guillermo González Ospina and music by Juan Mari Asins. This pasodoble is based on the development of a parade and a dance with every single "queen of the city" of Manizales, and it lasts one week.

Many pasodoble songs are variations of España Cañi. The song has breaks or "highlights" in fixed positions in the song (two highlights at syllabus levels,[clarification needed] three highlights and a longer song at open levels). Highlights emphasize music and are more powerful than other parts of the music. Usually, dancers strike a dramatic pose and then hold position until the end of the highlight. Traditionally, pasodoble routines are choreographed to match these highlights, as well as the musical phrases. Accordingly, most ballroom pasodoble tunes are written with similar highlights (those without are simply avoided in competition).

Because of its heavily choreographed tradition, ballroom pasodoble is danced mostly competitively, almost never socially, or without a previously learned routine. That said, in Spain, France, Vietnam, Colombia, Costa Rica and some parts of Germany, it is danced socially as a led (unchoreographed) dance. In Venezuela, pasodoble is almost a must-have dance in weddings and big parties. It became especially famous thanks to the hit song "Guitarra Española" by Los Melódicos.

This dance gained popularity in the US in 1930. It was too difficult to achieve widespread popularity. All moves are sharp and quick. Pasodoble takes up a lot of space, limiting it to special occasions.

In competitive dance, modern pasodoble is combined with other four dances (samba, cha-cha-cha, rumba and jive) under the banner International Latin. Modern pasodoble dance consists of two dancing parts and one break in between for dancers of class D and of three parts and two breaks in between for dancers of class C, B, A, according to the IDSF classification.[13] Dancers of lower than D-class usually perform only four official dances of the Latin-American Program. 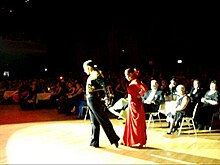