The hustle is a catchall name for some disco dances which were extremely popular in the 1970s. Today it mostly refers to the unique partner dance done in ballrooms and nightclubs to disco music.[1] It has some features in common with mambo, salsa and swing dance. Its basic steps are somewhat similar to the discofox, which emerged at about the same time and is more familiar in various European countries. In the 1970s there was also a line dance called the hustle. Modern partner hustle is sometimes referred to as New York hustle, however, its original name is the Latin hustle. People still do this dance around the world today. 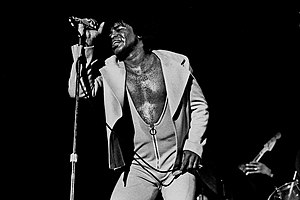 Early hustle was a 5-step count with no turns, created by Puerto Rican teenagers in late 1972 as a direct result of Puerto Rican Elders objecting to young teenagers doing a grinding slow dance known as the 500. Created in the South Bronx among Puerto Rican teens it was originally done at house parties, hooky gigs and basements club dances in the South Bronx. It became known as Spanish hustle; from 1975 to 1976, funk band the Fatback Band made a song with that name.[2] It was also known as the Latin hustle; and was a 6 step count to the beat of the music. And James Brown released Everybody's Doin' the Hustle album in 1975. Same year The JBs had Hustle with Speed album. Around 1976 it became known as the New York hustle. Later, known as just the hustle, when the dance became commercialized after the release of Saturday Night Fever in 1977. The early Latin hustle Pioneers were Willie "Marine Boy" Estrada, Willie Rivera, Eddie Raimundi and many other members. Some of them were members of a gang called the Imperial Bachelors, who used the Latin hustle as a way to bring peace into a violent South Bronx. They hosted hustle parties at St. Mary's Recreation Center on 145th St. and St. Ann's Ave, in 1974. Those parties ended on October 2, 1974, after the killing of a young man, Jaime "Rubberband" Rosendo, who was murdered over $1 by a 14-year-old teenager. However, it was the venue that produced some of the best hustle dancers in New York City, who would help spread the dance in nightclubs throughout New York City in late 1974.

In 1975 music business entrepreneur, Marty Angelo created the first all hustle dance television show entitled, Disco Step-by-Step. Each one-hour show featured top hustle dancers and two 10-minute instructional segments that allowed viewers to learn how to hustle dance in the privacy of their own living rooms. One of the first shows featured a young Billy Fajardo and the Disco Dance Dimensions. Many of the show's video clips can be found on YouTube. Marty Angelo also created the Hustle Hall of Fame online list of dancers in 2000 that he eventually turned over to Ron Bess and Mark James.

A line dance which was called hustle became an international dance craze in 1975, following Van McCoy and the Soul City Symphony's song "The Hustle". Tipped off by DJ David Todd, McCoy sent his partner Charlie Kipps to the Adam's Apple discotheque in New York City's East Side. Van McCoy with The Stylistics got disco songs such as "Disco Baby", "Can't Give You Anything" and "Funky Weekend". And "The Hustle" reached the top of the Billboard Pop Singles chart the week ending July 26, 1975.

The 1977 disco movie Saturday Night Fever showed both the line and partner forms of hustle, as well as something, referred to as the "tango hustle" (invented just for that film by the cast, according to the DVD commentary). Afterwards, different line dance and couple dance forms of the hustle emerged. Although the huge popularity faded quickly as the hype that was created by the movie died down, the hustle has continued and is now a "social dance"; it has taken a place beside swing, cha-cha-cha, tango, rumba, bolero, nightclub two-step and other partner dances in America.

The couple dance form of hustle is usually called New York hustle but frequently referred to by other names including "la hustle" or "latin hustle", it is very similar to the "Detroit hustle" but counted somewhat differently. It has some resemblance to, and steps in common with, swing and salsa dancing. As in the Latin dances, couples tend to move within a "spot" on the dance floor, as opposed to following a line of dance as in foxtrot.

One similarity between hustle and swing is that the lead takes the back-forward steps from his left foot; however it is not exactly a rock-step (there is no rocking action because of speed) and if the dance is taught by counting, the steps happen at the beginning of the count – "and-one, two, three" rather than at the end of the count as in swing – "left, right, rock-step".

The dance is somewhat unusual rhythmically because of the syncopation it is associated with. Most dances are danced with either 4/4 or 3/4 music with counting to match, with either a triple or duple base depending on the dance. The New York hustle is generally danced to 4/4 music but counted as a six beat pattern. The most common New York hustle counting pattern is "&1 2 3 &1 2 3", meaning "LR L R LR L R" in the leader's pattern and the natural opposite of the follower's pattern. However, the syncopation in three-count hustle also be danced: 1&23, 12&3, or 123&.[3]